Degroof Petercam Asset Management uses this ranking to determine which government bonds are eligible for its sustainability funds. To that end, it selects the countries which are considered to be the most responsible and sustainable.

The model is based on the five major sustainability pillars, namely transparency and democratic values (1), population, healthcare and wealth distribution (2), environment (3), education/innovation (4) and the economy (5).

“The sustainability analysis especially proved its worth during the Eurozone debt crisis, and has demonstrated that it is important to assess sustainability challenges at the country level. This enables us to assess their capacity to pay back their debts, rather than their capacity to take on additional debt,” argues Ophélie Mortier, Responsible Investment strategist at Degroof Petercam.

The United States continue to dangle from the bottom rung

Since the proprietary model’s inception, the United States has always resided in the bottom third of the rankings, with the country maintaining a score just above 50/100.

The five point lag of the United States vis-à-vis the average of the 35 OECD Member States, is largely explained by the criteria on environment and social welfare.

On the one hand, the United States remains a major consumer of coal, leading to high greenhouse gas emissions, while on the other, renewable energy as a proportion of the country’s overall energy mix remains below average.

On a social level, the considerable social inequality in the United States is infamous, as evidence by the GINI coefficient. Only Mexico scores lower than the United States. The myriad number of incarcerated persons in the US also plays a significant role in the overall picture.
The high number of people suffering from obesity is an issue for the US population in the mid and long term, as it entails substantial health risks and significant financial implications.

“Although the United States obtain a good overall score in terms of democracy and civil liberties, we do regret the fact that they failed to recognize the International Court of Justice or the Ottawa Convention on anti-personnel mines. Moreover, the death penalty has not been abolished yet in some states,” Ophélie Mortier remarks.

US maintain their lead when it comes to innovation and immigration

It is clear that the United States stand out when it comes to innovation. The country continues to play a leading role in that regard, both in terms of R&D expenditure and the number of patents registered.

Innovation constitutes an important challenge to developed countries, and the United States have clearly understood this. The employment rate of immigrants is also well above that of various other member states, including Belgium. This can partially be attributed to the fact that the US is partly due to the fact that the US aim to lure well educated immigrants into the country.

“Education levels of American and Canadian immigrants are well above those seen in Europe. After all, two thirds have obtained a degree in higher education, nearly twice as many as in Europe,” says Ophélie Mortier.

Donald Trump may cause the US to lose even more ground

Donald Trump’s statements do not suggest that the situation will improve, quite the contrary in fact. Although it has become clear that Trump will not officially throw the Paris Agreement signed by his predecessor to the wayside, he will not go to great lengths to reach the agreement’s objectives in terms of reducing greenhouse gases.

His statements made on the campaign trail clearly support an increase of coal production, a review of the operation of the Keystone XL oil pipeline and the production of oil and gas in Alaska and the Gulf of Mexico.

Despite the disavowal of the significance of climate change in Trump’s ‘America First Energy Plan’, several different studies demonstrate the U.S.’s continued vulnerability in this area.

Plans to lower corporate tax from 35 to 20% are, however, positive for the fiscal transparency of US companies. After all, they will no longer have any incentive to have their profits taxed in the country boasting the lowest tax rates.

“In the short term, such measures are a boon, but in the middle to long term they may pose risks to the financing of government policies. Although the measure does not entail real economic growth, the education and healthcare sectors will be the first to feel the pinch of the US economy’s budget cuts, an economy which is already heavily in debt. That’s why an improved forecast for the US score for these two sustainability pillars remains a tricky affair,” argues Ophélie Mortier.

Norway climbs to the top of ranking

Once again, a Scandinavian country climbs to the top of the ranking. Norway, which does extremely well in terms of social welfare and economy, climbs to first place, closely followed by neighbouring countries, Denmark and Sweden.

As Norway’s economy is largely dependent on oil, which is a fossil fuel, there is a lot of room for improvement regarding the environment, especially when it comes to the development of renewable energy. This is still underrepresented in the country’s energy mix. Energy efficiency can still be improved, given the high energy consumption rate in relation to economic growth.

The country’s institutions are solid, and there is a high level of freedom of the press. Economically speaking, the country is solid and state finances are in good health. Finally, there is virtually no social inequality in the country, as the wealth per capita is higher than the OECD average.

Ireland has the most bang for the buck 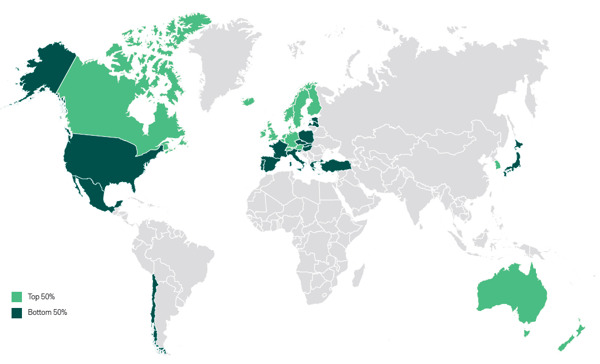