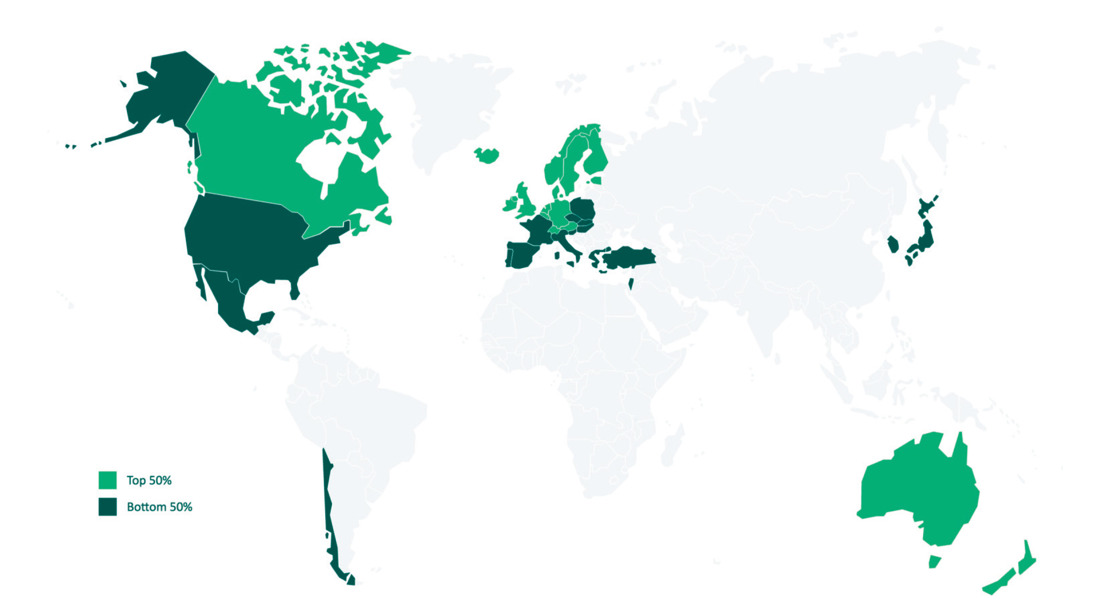 Belgium: better environmental score, but a challenge in terms of the employment rate among immigrants

Belgium is evolving positively in the sustainability ranking, notably in the environmental domain. In the light of the COP 21 climate summit it is relevant to stress that CO2 emissions and coal electricity production are declining, while the share of renewable energy in electricity generation is rising. However, air quality is not improving, with a score below the OECD average.
While Europe’s borders are facing waves of immigrants and Europe is reviewing its integration policies, Belgium continues to lag behind with an employment rate for immigrants which is below the OECD average.
Against the backdrop of an ageing population, a problematic old-age dependency ratio and low birth rates, immigration should not be considered a threat, but a growth driver instead. By investing in immigrants’ skills, Belgium will be able to increase its active population and consumer demand as more people will have purchasing power. It is interesting to note that two thirds of immigrants moving to the United States and Canada have post-secondary degrees, almost double the figure for Europe.

Denmark again at the top of the ranking

Thanks to its leadership position in the area of ‘transparency and democratic values’, Denmark had conquered the first place in the ranking. With the exception of education, the number one has positioned itself among the top three of four sustainability pillars. This demonstrates the interaction between the pillars in order to achieve a solid, sustainable commitment for the future.
Denmark stands out by its willingness to advocate an environment of peace and mutual support. Boasting the lowest corruption level, as well as a murder rate which is among the lowest, the country is also committed to global sustainable development by being one of the most generous countries, as it allocates 0.9% of its gross national income to development aid. Among other things, the Danish benefit from the best housing conditions, and belong to the most satisfied citizens in terms of quality of life.
However, in the field of education, Denmark has not yet reached its level of excellence. That is surprising for a country which shows such great commitment and serves as an example in reducing poverty and social inequity. The challenge is to address the socio-economic and cultural divergences between high-school students, as illustrated by the OECD PISA test.

France’s efforts are not enough to safeguard a leading position

For a growing number of indicators, France has obtained a score which is lower than the average of its OECD peers. Despite the improvements, in particular in the field of renewable energy, unemployment, the old-age dependency ratio and the number of post-secondary graduates, France loses four points and is relegated by six places in the ranking in just one year. This is not really a surprise, explains Ophélie Mortier, responsible investment coordinator at the asset management company and in charge of the ranking. “France has seen its scoring deteriorate progressively in the past few semesters, and this applies to all five sustainability pillars.”

France is facing major challenges, particularly with regard to immigration, with the country having nearly six pensioners for just ten active people. Although unemployment is falling, youth as well as long-term unemployment have become a social and economic reality.
Finally, while the global climate summit COP21 will take place in Paris, France is not doing particularly well versus its neighbors in terms of various environmental indicators. Although the utilization rate of renewable energy is on the rise, it remains below 5% of the energy produced. Air quality, measured by particulate matter and deaths attributable to outdoor pollution, is below the average.
The sustainability ranking is based on a best-in-class approach, so in other words it assesses the score of a country versus its peers while looking at the same pillar. Hence, France’s degradation should be considered in relative terms,; it is explained by some degradations but also by some improvements, which remain insufficient compared to those recorded by other countries.